The University of Mumbai (Bombay) was established in 1857. The Rajabai Tower Library was opened to the readers in February 1880. Due to shortage of space another Campus of the University was set up at Kalina, Santacruz. Jawaharlal Nehru Library was constructed and was inaugurated on 18th October, 1976. Jawaharlal Nehru Library (JNL) at Vidyanagari is built on modern architectural principles of modular construction The collection here is divided into social sciences; pure and applied sciences and humanities. Separate stacking and reading rooms for these collections facilitate easy access.

At present the total collection of library is approximately 7, 92,000 and it also has rich collection of manuscripts, rare books, journals and artefacts. It is also enriched by personal collections donated by renowned individuals.

In August, 1864, Premchand Roychand, provided a donation of Rs. 2,00,000 towards the erection of a Clock tower and Library which was named after his mother Rajabai. Rising to a height of 280 feet it catches the eyes of visitors as one of the most attractive architectural features of Mumbai. The ground floor has 2 side rooms, each measuring 56 feet x 27.5 feet and a staircase vestibule 28 feet square. The Rajabai Tower forms a carriage porch 26 square feet in front of the building. The Tower, over the carriage porch, has a square form up to the gallery at the top of the first stage which is at a height of 68 feet from the ground The form changes from a square to an octagon and the height from this gallery to the top of the tower is 118 feet and the third stage to the top of the final is 94 feet, thus making a total height of 280 feet.

Above the first gallery in niches cut in the pillars at the corners of the octagon are carved stone figures representing different races and costumes of Western India and higher still are figures representing the communities of Bombay State including the Parsi, Memon, Gujarati, Maratha and Kathiawari communities. It is said that during the construction of the building which took nearly 10 years, not a single accident occurred despite the hazardous heights. The building is not only a master piece in its aesthetic sense but has achieved iconic heritage status in the eyes of the world.

A Library Building Stained Glass restoration Project (1997-1999) was undertaken by the British Council Division and the University of Mumbai. This project was awarded the UNESCO Asia Pacific Honorable mention 2001

“To be a Centre of Excellence in Creation, Conservation and Dissemination of Information and to strengthen its faculty and student community by adopting innovative strategies, thus contributing meaningfully to the development of the University and hence to society and the country as a whole.”

KRC has in its collection different print resources like books, journals, bound volumes and theses, in addition to rare resources.

The library possesses more than 1,190 manuscripts in Arabic, Persian and Urdu and about 7,500 in Sanskrit and allied languages.

A descriptive catalogue of the Arabic, Persian and Urdu manuscripts in the library compiled by Khan Bahadur Abdul Kadir-e-Sarfaraz was published in 1935. This collection contains manuscripts on the Islamic theology, logic metaphysics, Sufism, history, biography, literature, lexicography, astrology and astronomy, medicine, archery, falconry, Dakhni language and Zoroastrianism. There are also translations of Sanskrit works.

The second collection of the Arabic, Persian and Urdu manuscripts. which contains some valuable manuscripts in Dakhni Urdu belonged to the Late Maulvi Muhammad Yusuf Khatkhatay of Bombay. This collection was brought to the notice of the University by Professor A. A. A. Fyzee and it was purchased for the library from the heirs of the late Maulvi Saheb.

A valuable collection of 160 Arabic manuscripts. was donated by Professor Fyzee in 1962. These deal with law, history, theology and philosophy of Mustalian Ismailis, popularly known as Daudi and Sulaymani Bohras. This collection has a special significance because it makes available to scholars and research workers material which was deemed to be highly secret and not allowed to be in the hands of non-sectarians. Some of the unique items in this collection are :
“Kitabul Islam” and Alamun-nubuwa”, two important works of the first Ismaili author, Abu Hatik ar-Razi; most of the works of Fatimid period; some of the works of Mu’ayyad fid-din ash-Shirazi, another famous writer of the Fatimid period. A descriptive catalogue of this collection compiled by Professor Muizz Goriawala was published in 1965.

Over the years the Library has acquired many prominent special collections e.g.

People have also donated their entire collections to the University.

Knowledge Resource Centre has two Anti-plagiarism software, Urkund and Turnitin. Faculty members of the university departments and authorized university department guides have to send an email (librarian@library.mu.ac.in )  to the Director, KRC, University of Mumbai or in person.

KRC undertakes digitization of its rare resources as a part of its preservation initiative. In the year 2017, KRC received scanners under RUSA grant. It is in the process of developing a library of digitized resources. Details of documents scanned. 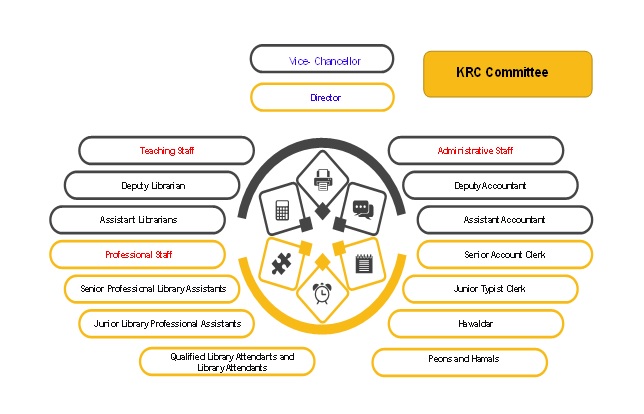