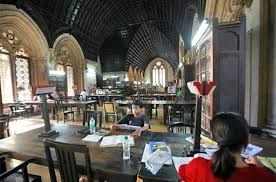 The University of Mumbai (Bombay) was established in 1857. In August, 1864, Premchand Roychand, a merchant prince of Bombay, offered to the University a donation of Rs. 2,00,000 “towards the erection of a university library which may be an ornament to the city, and by becoming a storehouse of t he learned works, not only of the past but of many generations to come, may be the means of promoting the high ends of the University.”

Two months later this gift was followed by another gift of Rs. 2,00,000 from the same donor for a clocktower in connection with the library to perpetuate the memory of his mother Mrs. Rajabai.It was formally opened to readers on February 27, 1880, after a conversazione by the Chancellor. The building then housed not only the library but also the administrative office and was also the venue of the post-graduate lecture.The foundation-stone of the library and the Rajabai Clock tower was laid on March 1, 1869, and the work was completed in November 1878.